Posted by Lynn at 11:03 AM No comments:
Labels: Children's literature, YouTube

After consistently deleting (and deleting and deleting) more spam comments today I was thrilled to see this news announcement on my blog dashboard yesterday; "We have enabled automatic spam detection for comments on some blogs. You should occasionally check the comments in your spam in-box." - Blogger Help

I am not sure how wide-spread the spam detection is, but this blog and several library profession blogs I author had the option available to use. On one blog the comment spamming was bad enough I set it to moderate, so this is a welcome update. For more information, read the Blogger Buzz post, New Comments System on Blogger (8-10-10).
Posted by Lynn at 9:15 PM No comments:
Labels: Blogger Buzz, Blogs

In Linda Howard's,Veil of Night, wedding and event planner Jaclyn Wilde is deftly juggling a series of six weddings in five days for Premier. When Carrie Edwards, a particularly difficult and demanding bride (one who puts the 'zilla" in Bridezilla, bless her heart) becomes unmanageable, Jaclyn is able to salvage her reputation and the bill - at least until the bride-to-be is murdered. One of the last people to see Carrie alive, Jaclyn becomes one of many viable suspects investigated by Detective Eric Wilde. Complicating matters, Eric and Jaclyn shared a passionate encounter the night before Carrie was murdered. As the investigation widens, Eric learns few mourn the bride's death and now the killer is focused on one potential witness - Jaclyn. Brimming with intrigue, passion, suspense and seasoned with characters who have humor and wit, this is one eventful night.

Veil of Night is what I consider vintage Linda Howard; Mr. Perfect, Open Season, Dream Man, and Killing Time, feature strong characters, humor, great dialogue, mystery and plenty of sizzle. Jaclyn's father was left a bit adrift towards the end (easy for me to say) and I was not particularly surprised by the killer's identity, but the characters make this title well worth the time and a second read is imminent.
Posted by Lynn at 7:53 PM No comments:
Labels: Linda Howard, Recreational Reading

My netbook got a bit cranky this evening, taking a good fifteen minutes to run various updates and a bit longer to fully re-charge.  Guess that's the penalty for letting it sit inert for over ten days.

I waffle between using blogger in draft and regular blogger. I like blogger in draft for it's realistic preview option, especially in conjunction with the new templates, the stats because I just love that stuff and can compare them with feedburner, statcounter, and I especially like the 'undo' button. I like traditional blogger because I can drag image size to suit me instead of having to choose a preset size, the simpler link options are easier to use, and it loads quicker.  Guess I'll just keep alternating to suit my moods.

A new season of Project Runway premiered last week! It will take time for a favorite to emerge, at least for me, but I already question the judges decision to keep some of the bottom players last week.

I am really disappointed in the 'apprentice-like' look to the new season of Design Star.  I have seen two episodes and miss Clive and the overall kitchiness previous seasons featured.  It's too slick for my taste and I don't care about the designers.

Warehouse 13 and Eureka are off to great starts this season.  Last night's cross-over event was well done.  But I have to wonder, if the Eureka characters to go back in time again then return to their old reality, where does that leave the cross-over events?  The Warehouse 13 episodes happened in their new reality - Fargo even said he was running GD.
Posted by Lynn at 10:51 PM No comments:
Labels: blogger draft, Eureka, Netbook, Warehouse 13

I spent a happy twenty minutes or so this evening fiddling with the header of my Firefox browser using their new persona option. After the automatic download of the latest version of Firefox, 3.6.8, loaded a second tab opened tempting me to personalize the look of my browser. There are a significant number of options available, including film and television, music, nature, and sports.

I quickly narrowed my search to film and tv - Despicable Me minions, Toy Story 3, and Harry Potter - and sports - most notably Pittsburgh Steelers. After applying several personas, I went with the HP book cover for Deathly Hallows. Why? I liked the colors, so many options were dark and made it difficult to locate and use browser options. This option is significantly better than the recent Google personalization because it covers only the browser header as opposed to the entire open window. Additionally, there is no lag time when Firefox opens for use. All and all, I like their persona and will probably change my mind more than once. 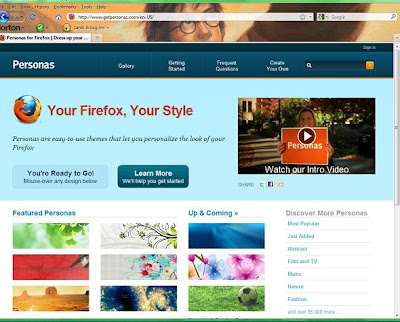 About Me: I am intrigued by blogs, their potential and hypothetically speaking, am searching for my virtual voice within the blogosphere.

My writing topic, or topics, will vary; however things discussed on the blog may fall within four broad categories:

Books ~ Professional books, juvenile books, YA books, recreational reads, and whatever book strikes my fancy at any given time.

On the Shelf:
Juvenile and YA

In the Stacks:
Juvenile & YA

On the Shelf: Recreational

In the Stacks: Recreational